Who is Alexandria Ocasio Cortez? The astrological profile
Embed from Getty Images

These periods can be very difficult, but for Saturn/Capricorn people they have the potential to be life changing in highly beneficial ways.  Many of the Capricorn stellium people, with the dreamy genius of Uranus/Neptune in their charts, have had difficulty coming to terms with the duality in their personalities between the creative inspiration of Uranus/Neptune and the requirement of grounding and achievement of Saturn/Capricorn.  Under these influences right now and in the coming years, this will change and these young people will find their feet and begin to make a huge impact on our society. 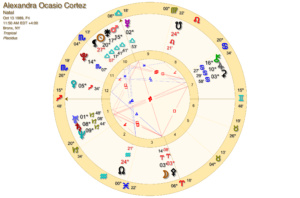 Ms. Ocasio-Cortez (born October 13, 1989 at 11:50 am, Bronx NY)  is one of these Uranus/Saturn/Neptune people.  With the Sun in Libra, she has the potential to be a diplomat and even-handed crusader for justice.  Mars, planet of aggression and assertive energy, conjoins the Sun in Libra which adds a dynamic element to the Libran urge for peace and harmony.  Her Moon (emotions) is in fiery and idealistic Aries, giving her the heart of a warrior that will help her to overcome some of the inertia that can happen when Libra becomes stuck on the horns of indecision.  The Sun and Mars are both located in the 10th house of career and public life, suggesting that very little can be done to keep her out of the spotlight.

Ms. Ocasio-Cortez’s Mercury (communication) is also in Libra, a placement that tends to denote someone who is collaborative and works to ensure that everyone involved is pleased with a result.  This gives me hope that she will be able to be a uniter rather than a divider, although her Mercury is opposed by her Aries Moon, denoting an impulsivity that could cause her to speak without first thinking.  If this birth time is correct, her Mercury is fairly close to the Midheaven (the cusp of the 10th house) which often denotes someone who changes career quite frequently.  If the political thing loses interest for her, she will easily move on to something else.

This opposition is part of a Grand Cross – a powerful astrological complex of six cardinal (action) planets in a stressful alignment that includes Saturn, with all its tests and challenges.  People often think that a Grand Trine, with its ease and flow, is a “better” aspect to have in one’s chart and if easier is better, then this may be true.  But a Grand Cross, if it doesn’t kill you, WILL make you stronger by necessity – especially if Saturn is involved.  And in Ms. Ocasio-Cortez’s chart, Pluto (transformation and regeneration) harmonizes with Jupiter and Saturn to effect the kind of change that this kind of personality is driven towards.  She was a super achiever even in high school, when her science project won the attention of the International Astronomical Union which named an asteroid after her:  23238 Ocasio-Cortez.

AOC is no stranger to the kind of stress we would expect from a chart with a Grand Cross.  Her father died in 2008 when she as only 19 and struggling to pay for college, yet she persisted.  The ten years since then have been marked by transit of both Uranus (radical change) and Pluto (intense personal transformation) to the Grand Cross, all of which she appears to have weathered and emerged with greater power.  During her Saturn return (the time when Saturn returns to its place in the natal chart) and with Uranus and Pluto making stressful transits to her Sun and Mars, she won a seat in the House of Representatives in what was called one of the biggest upsets in modern political history.

Sagittarius is rising in the chart, showing that her broad vision and adventuresome spirit will encourage her to keep expanding her influence and spreading her message.  Sagittarius is the sign of optimism and faith in life itself, and tends to bestow an attitude of continual expansion and learning.  AOC’s Venus (relating)  is also in Sagittarius, giving her a fun-loving social sphere and a dislike of commitment.  With Venus in the 12th house of transcendence and that which is hidden, spirituality will be important to her and she will likely prefer to keep her personal relationships private.

Speaking as someone from the Pluto in Leo generation, it’s exciting to see these young people take the reins of power.  After all, they will inherit the world that we now live in, and it will be interesting to see what they make of it.

This is a capsule astrological profile and not intended to be a complete analysis of the natal chart.