Why do some people have difficult charts, 1966 edition
Embed from Getty Images

That is an intense combination of planets, and when that planetary system is embedded in the natal chart it can be quite traumatic.  The heightened emotionality and sense of abandonment of Chiron combined with Saturn’s isolation and tendency towards depression brings with it the necessity of a great deal of internal work in order to function and gain the ultimate benefits of this combination, which is the eventual healing of those old wounds and a deep interplanetary wisdom that results.  The opposition of this system to Uranus and Pluto is very difficult on an energetic and personal level, but can also be extremely empowering and assist the individual in becoming an important changemaker. 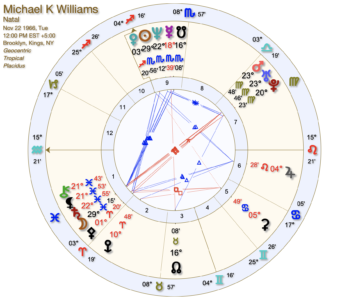 Mr. Williams (November 22, 1966, time unknown) was born with the Sun at the turning point between Scorpio and Sagittarius – the point between intense passion and drive (Scorpio) and hope and optimism (Sagittarius).  With the Sun interacting with the two most beneficial planets – conjunct Venus (love and beauty) and in a harmonious trine to optimistic Jupiter in Leo – he was driven by good luck and good fortune as well as the challenges of the Uranus/Pluto opposition to Chiron/Saturn.  However, Mars (need and desire) was tightly involved in that system, suggesting a tendency towards anger and rage which, in the sign of Virgo which does not support the acting out of anger and frustration, would likely have been suppressed by Chiron/Saturn.  His sensitive Moon (emotions) may have been involved in the system as well, deepening the emotionality which would have had a difficult path to expression.

It is clear from the outpouring of respect after his death that Mr. Williams was able to channel all of this intense energy into his acting roles, and enable the viewer to deeply feel and understand the characters which he played.

Over the past year, transiting Neptune (transcendence but also addiction) was setting off that complex system in his chart, perhaps creating some confusion and a deep desire to escape, if only for a short time.   and Mr. Williams announced in February that he was in therapy:

‘I just started therapy, you know, and really taking that seriously and starting to unpack, like you said, the critic in my head and what and how that has affected my –  my actions, my responses to certain situations, my relationships,’ Williams said during the February 25 Tamron Hall Show.

Williams, who was said to get lost in roles by friends and colleagues, said that doing the movie, where his character is involved in a multi-million drug rehab scam, ‘made me sick to my stomach.’  He said it brought back memories of his own battle with addiction, watching TV commercials for ‘elaborate, beautiful’ recovery centers ‘when I was crying myself to sleep and listening to BeBe and CeCe Winans.’

This Daily Mail article has extensive information about his life and struggles. Mr. Williams died of an apparent Fentanyl overdose after struggling with addiction since the age of 19.  It’s a sad end to a beautiful talent.

The difficulty of a chart like Mr. Williams does not have to end in tragedy, but it takes a great deal of personal work.  I suspect that the gift of losing himself in challenging characters made it that much more difficult for him to find himself, and the long-lasting transit of Neptune often can create a confusing morass of emotions from which it can be hard to emerge.

If you or someone you know was born in 1965 and 1966, it may be helpful to know about these astrological factors which require a journey of personal healing.  A personal reading with a trusted astrologer who understands the effects of Chiron in particular is highly recommended for greater understanding. ❤️