Why Miley Cyrus can’t settle down: An astrological view
Embed from Getty Images

In any event, Miley Cyrus is one of these incredibly creative beings that were born during this time when conventional restrictions were shattered and doorways between worlds were opened.  Those born during this time are different from others – they tend to process information differently and often find that they don’t fit into traditional ways of looking at the world.  So relationships are different too, and many of this generation are creating new molds of gender identity and sexual preference. 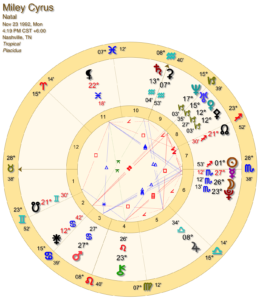 Still, Miley’s astrological chart makes relationships even more difficult.  First, her Sun is in the sign of Sagittarius which craves freedom and adventure.  Yet her Moon is in intense Scorpio, and it conjoins Pluto which is Scorpio’s modern ruler so this is an astrological double whammy which screams to us that she has a passionate nature with fiery emotional depths.  Her Capricorn Venus is practical in a choice of a mate, but conjoins both Uranus and Neptune so she is at once highly romantic and perhaps over idealistic (Neptune/Venus) as well as needing a lot of autonomy and fresh new energy in her relationships (Uranus/Venus).

That Moon/Pluto conjunction is challenging, and is made even more intense by a difficult square from Chiron (wounding and healing).  You can’t judge a person’s insides from their outsides, and Miley is likely carrying some emotional baggage.

All of this planetary energy provides tremendous creative fuel, and with disciplined Saturn ruling her Midheaven (career point) which is also trine to Jupiter (good fortune), there is nowhere for her to go but up.

Many of us have difficult astrological charts when it comes to relationships, and sometimes it takes a while to find the inner balance required to integrate this sort of psychological dissonance.  That is especially true of a young and sensitive woman growing up in the public eye.  But this is a strong chart, full of independence and courage, and I am confident that Ms. Cyrus will continue to grow and evolve and produce creative and innovative works.