Jennifer Aniston is a mystery to entertainment writers. Is she pining away for Brad Pitt? Will she get back together with Vince Vaughn? Let’s see what the planets say about Jennifer Aniston’s choices in men.

Jennifer’s astrological chart reveals her to be a cool Aquarian (see earlier article for a more complete chart analysis), but with her Moon and Venus both in fire signs (Sagittarius Moon and Aries Venus) she has a passionate side to her nature. She is also extremely independent, as shown by the conjunction of Uranus (autonomy) to Jupiter (adventure) in her chart struggling in opposition to Venus, her desire to forge relationships with others. This dynamic can demonstrate commitment issues, and a difficult aspect (square) from Pluto to her Moon shows an intense emotional nature and fear (Pluto) of rejection. At the same time, Saturn (restriction) is conjunct Jennifer’s Venus, revealing a basic lack of confidence in her own appeal to others. 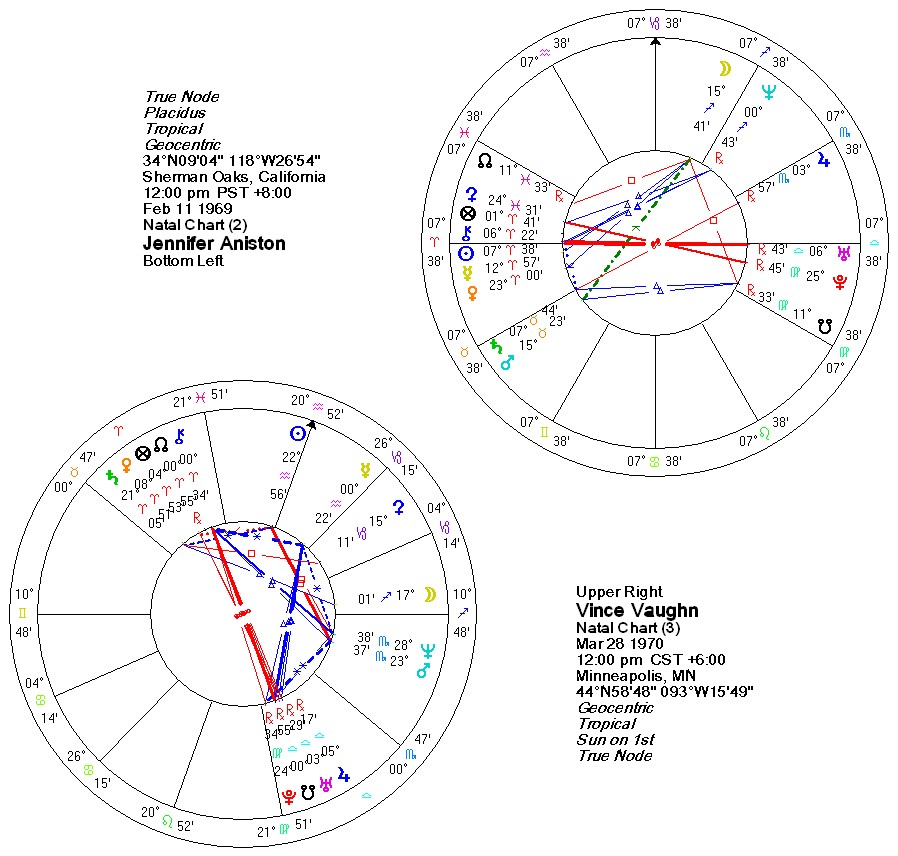 [Click chart to enlarge] Vince has an Aries Sun, and his Sun sits right on Jennifer’s Venus so it is no wonder they quickly became attracted to each other while filming The Breakup. In addition, their Moons are closely conjunct signifying emotional compatibility and understanding. And with their Mercurys in compatible signs they communicate well which is a keystone of any lasting relationship. Still, Vince has his own issues: he too his fiercely independent and rebellious with the planet of revolutionary behavior (Uranus) opposing his Sun. With four planets in Aries, he can be dominating and a bit boorish. Still, there is a part of him (Mars conjunct Saturn in Taurus) that wants to settle down and lead a relatively staid life of security and predictability. This sets up a conflict that can create commitment problems for Vince as well.

While their charts demonstrate a strong sense of familiarity and compatibility, it is clear that they push each other’s buttons as well. Uranus in Vince’s chart is opposite Jennifer’s Venus and her Uranus opposes his Sun. These polarities reveal an excitement to their relationship and a sense of the unexpected, but also a difficulty in establishing stability and commitment. The fact that it is Vince’s Uranus that is opposing Jennifer’s Venus shows that Vince is the one who tends to run from commitment here. However, Jennifer’s Saturn is conjunct Vince’s Venus, which can often be a signal for a lasting partnership. This may cause Vince to feel like Jennifer is spoiling his party, but he also appreciates the sense of stability that she provides for him.

Because Vince and Jennifer’s Moons are near the same degree of Sagittarius (depending on their time of birth), they will undergo planetary cycles to their Moon at the same time. Currently they are both undergoing a series of liberating transits from both Jupiter and Uranus to the Moon which is freeing them from emotional constraints but also making this a difficult time to make any commitments. It is unlikely that either of them will commit to anyone until well after these cycles are complete next year.