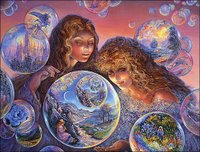 Jupiter and Neptune have begun a battle (a 90 degree square) which will continue until the end of March, at which point they will briefly separate and come together again in September. The cycle that we are currently in is similar to the period of “irrational exuberance” just before the stock market bubble popped in the first quarter of the year 2000. The conflict between Jupiter and Neptune in their square aspect creates an environment of optimism (Jupiter) that is largely based on fantasy (Neptune), and a sense of overconfidence (Jupiter) in one’s ability to transcend the boundaries that ordinary diligence requires (Neptune).

In astrological symbolism, Jupiter represents expansion, opportunity, optimism, and a sense of faith that life has meaning. Neptune as we have seen in other articles here, represents the blurring of ordinary reality for the purpose of exposing a greater sense of mystery and opening us up to higher realms of awareness.

The shadow side of Jupiter involves over-expansion of ego and self, so we tend to see self-righteousness, reckless overconfidence and extravagance, and a failure to take advantage of opportunities that are presented to us. The shadow side of Neptune involves the sinking into illusion and confusion, where we may be more likely to be deceived by others or by ourselves, or over-romanticize a situation.

Because Jupiter deals with issues of abundance and prosperity, it is often prominent in the ups and downs of the stock market. Jupiter is currently passing through Scorpio, which rules the stock market (other people’s money), so it is not surprising that since Jupiter entered Scorpio last October the stock market has been going up (Jupiter rules expansion), reaching 11,000 for the first time.

Back in 1999, stocks were rising during the dot com boom, and Fed chief Alan Greenspan warned of “irrational exuberance” in the market. This period coincided with a square of Jupiter to Neptune which began in the summer of 1999 and ended when Saturn (discipline and limitation) conjuncted Jupiter in the spring of 2000, when the stock market bubble burst, followed by the devastation in the dot com sector.

Saturn and Jupiter first drew swords in December, and re-enter the battle in June. Watch for the markets to crash somewhat at that time as Saturn’s stern demand for reality thinking bursts the bubbles of fantasy. But I predict the real crash will come in September as the clash between Jupiter’s optimism, Neptune’s fantasy and Saturn’s lessons come to a head. It will be useful to start watching over the summer for signs of expansion without sound fundamentals, and pull out of investments that appear unwise at that time.