In Sweden a new religion called “kopimism” is dedicated to the right to share files freely across the internet.  This religion has been officially recognized by the Swedish government as a lawful religion. Its sacred symbols are ctrl-c and ctrl-v (the PC keyboard shortcuts for copy and paste).  This is not a joke.

For the past 2150 years or so we have been in the Age of Pisces (see my earlier article for the delineations between the Great Ages and a discussion of when the Aquarian Age begins.)  The sign of Pisces is ruled by both Jupiter, its traditional ruler, and Neptune, its modern ruler.  Both Jupiter and Neptune are connected to the spiritual life, but where Neptune deals with matters of the Spirit in which worldly issues are transcended for the sake of an inner experience, Jupiter seeks meaning in life through building a theological construct and tenets that give us comfort and a sense of peace.  Any system of beliefs is a Jupiterian experience, and any divine or creative experience is an experience of Neptune. So the Piscean Age, which began sometime around the beginning of the common era (0 c.e.) has been the age of religious and spiritual experience. 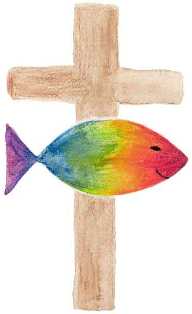 It would be a mistake to say that Pisces itself is connected with religion specifically, because there is this image with Pisces of two fish swimming in opposite directions. At its best, Pisces works to integrate the spiritual life (Neptune) with the intellectual beliefs of Jupiter and in doing so one often obscures the other. The Piscean Age oversaw the greatest expansion of one religion that the world had ever known; it has also been the age of ignorance and deception (negative Pisces traits), during which religious fervor obscured a 2,000 year history of war and abuse by various religious establishments around the world. It’s no accident on an esoteric level that Christianity is symbolized by the Ichthys (fish) which was used as a secret symbol by early Christians to mark their meeting places.  The concept of fish factors prominently in the stories of Christianity, with Jesus as a fisher of men, converting loaves into fish, teaching men to fish.

But the Piscean Age also brought about a surge of mysticism and spiritual exploration of various kinds. Every major religion had its mystical branches, even the Roman Church in which such practices were banned in public but practiced in secret.  The idea that one can have a direct individual connection to the Divine violates the basic laws of the Church which required the intercession of the priestly class.

The Aquarian age is likely to be a very different story.  Aquarius also has a double rulership: Saturn is the traditional ruler and Uranus is the modern ruler, and never two did two different planets share a bed.  Saturn presides over structure and form and the status quo, and Uranus is dedicated to shattering the status quo and creating a New World Order where everyone is free and rational.  Because Saturn tends to be rather rigid it is often associated with the rigidity of religious doctrine, but Uranus is the planet of science and reason, neither of which are typically very supportive of religion.

There is no doubt that the presence of religion in our lives is changing, especially in the United States which, with Jupiter-ruled Sagittarius rising and Jupiter conjunct the Sun in the national chart is exceptionally tied to religious dogma.  A recent Pew study found that 28% of all adults surveyed had left the religion of their childhood, a rather astonishing number.

As we continue to move into the Aquarian Age, the force of “reason” is likely to dominate over spiritual experience, bringing another set of dangers.  The idea that in the Age of Aquarius “peace and love will rule the sky”  promulgated by the musical Hair is a fantasy.  If you ever read Animal Farm by George Orwell, a book about the dangers of communism where all are equal and none are free, you’ve seen the dark side of Aquarius in action.

Over the past 50 years or so since we’ve been in the transitional phase between the Piscean and Aquarian ages there has been a surge of new religions.  Neopagan and WIccan cults have gone almost mainstream.  The study of yoga has brought eastern religions into western thought.  Islam is one of the fastest growing religions in the world, followed closely by Bahai and Sikhism.

Will this proliferation of new religion and faiths mean an increase of peace and understanding, or continued religious warfare?  The choice is up to humanity and only time will tell.