Will Smith and the Chironic wound
Embed from Getty Images

Will Smith has been having a bit of a breakdown lately.  In the fall of 2021 he published his memoir and came out with a YouTube documentary called “The Best Shape of my Life” which also showed him writing the memoir and facing some emotionally painful memories and truths including the fact that he had considered suicide.  And this week the breakdown spilled out in a very public way when he slapped Chris Rock at the Oscars for insulting his wife Jada Pinkett.

Smith was born under the Sun in Libra in a very tight opposition aspect (180 degrees) to Chiron in Aries. Chiron, a small planet with comet-like properties, was discovered in 1977 and is associated with wounding and healing. Often called the “wounded healer” (a name I personally dislike because of the negative connotations of a wounded psyche attempting to heal others instead of themselves), I think of Chiron as the “soul healer.” Chiron’s role is to expose old wounds when the psyche is prepared to digest and release the trauma – physical, mental or spiritual – that is held energetically in the body.  When Chiron is strongly aspecting one of the personal planets or the Sun and Moon we are often hyper-sensitive and carrying a greater number of wounds from old traumas than the average person. (Not everyone with a strong Chiron aspect has experienced trauma, but the emotional hypersensitivity is present in any case.)

Chiron in Smith’s chart is in Aries, so between 2019 and 2021 or so transiting Chiron hit his natal Chiron. The Chironic wound in Aries is a wound to the ability to establish an identity. “Who am I?” is the question asked by Chiron in Aries, especially when it is opposite the Sun in Libra which seeks to establish relationship and is less concerned with Self. This requires a delicate balance in order to find that midpoint of personal satisfaction, and it doesn’t help that Saturn, the planet that shows where our limitations lie, is also in the sign of Aries. 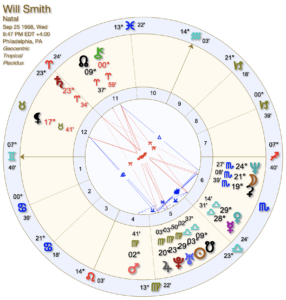 Smith’s chart shows that Gemini is rising at the cusp of the first house. Gemini can be a shapeshifter – there is a hunger for different experiences and an ability to take on different roles. This is obviously the perfect ascendant for an actor, but in a chart like Smith’s it can lead to an artificial facade with an interior that can feel lost. Smith’s Moon is in intense Scorpio – he feels deeply and is likely able to hold a grudge for quite a long time. A conjunction from Jupiter to Pluto often accompanies a personality with an intense need for control, and there are sometimes intense Plutonic experiences which require total transformation as a result of Jupiterian strongly held beliefs. In his memoir Smith admitted to “crafting a joyful exterior” in order to cover up the emotional pain.

Smith’s YouTube series “The Best Shape of My Life” contains some poignant moments in which this pain leaks through the carefully crafted facade that we have seen in his movies.  With Saturn (repression and limitation) and Chiron (wounding and healing) both in Mars-ruled Aries, issues around self-preservation, frustration and anger are highlighted in his chart. It doesn’t help matters that Mars in his chart is singleton – it makes no major aspects to other planets in the chart other than an awkward quincunx (150 degree) aspect to Chiron. A singleton Mars isn’t supported by other planets – it’s like a schoolyard bully who sits alone with nowhere to vent his anger. And as we know, anger turned inward becomes depression and with Saturn retrograde in the natal chart that negative voice of Saturn tends to be internalized to a greater degree.

This week at the 2022 Oscar ceremony Will Smith unceremoniously slapped Chris Rock for an inappropriate (in my opinion) joke at Smith’s wife’s expense. This wasn’t the first time Rock had insulted Jada Pinkett, who suffers from alopecia, and Smith wasn’t having it. At the time, transiting Jupiter was exactly opposite Smith’s natal Jupiter which is an extremely liberating influence.  Transiting Saturn squared his Moon, with Mars close behind, exacerbating his frustration, and Chris Rock was just the wrong person at the wrong time with his Mars conjunct Smith’s Uranus/Pluto conjunction.