Worship of Zeus may be much older than supposed

Worship of Zeus may be much older than supposed 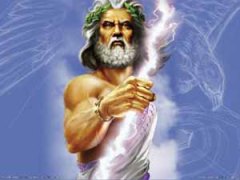 Excavations at Mount Lykaion in Greece have unearthed pottery shards that date back over 5,000 years.  Mount Lykaion is one of the mythical birthplaces of Zeus (later known as Jupiter in Roman mythology), and this has led to speculation that Zeus may have been worshipped in this location 1,000 years earlier than previously supposed.

The fact that the ash altar to Zeus includes early material dating back to 3000 BCE suggests that the tradition of devotion to some divinity on that spot is very ancient. The altar is long standing and may in fact pre-date the introduction of Zeus in the Greek world. We don’t yet know how the altar was first used, and whether it was used in connection with natural phenomena such as wind, rain, light or earthquakes, possibly to worship some kind of divinity male or female or a personification representing forces of nature.” .

Evidently there are layers of archaeological findings that span thousands of years, and early 20th century excavations suggested the earlier activity there to be 700 bce.  One of the arguments against ancient civilizations such as Atlantis is that no evidence has yet been found for such a civilization, but as archaeologists continue digging deeper and deeper into the millenia they keep pushing back the limits of the earliest civilizations.

Was Zeus a human person that was literally born on Mount Lykaion?  In mythology he was one of the Titans, the children of Gaia (Earth) and Ouranos (Sky) that later battled with the gods for control.  This is very similar to the Genesis myth of the Daughters of Man (Earth) mating with the Sons of God and bearing children:

The Nephilim were on the earth in those days, and also afterward, when the sons of God came in to the daughters of men, and they bore children to them. Those were the mighty men who were of old, men of renown.

Men of renown: Zeus and Kronos and the other characters of Greek myths?  It’s all very fascinating to me and the archaeological evidence keeps getting closer to the truth.